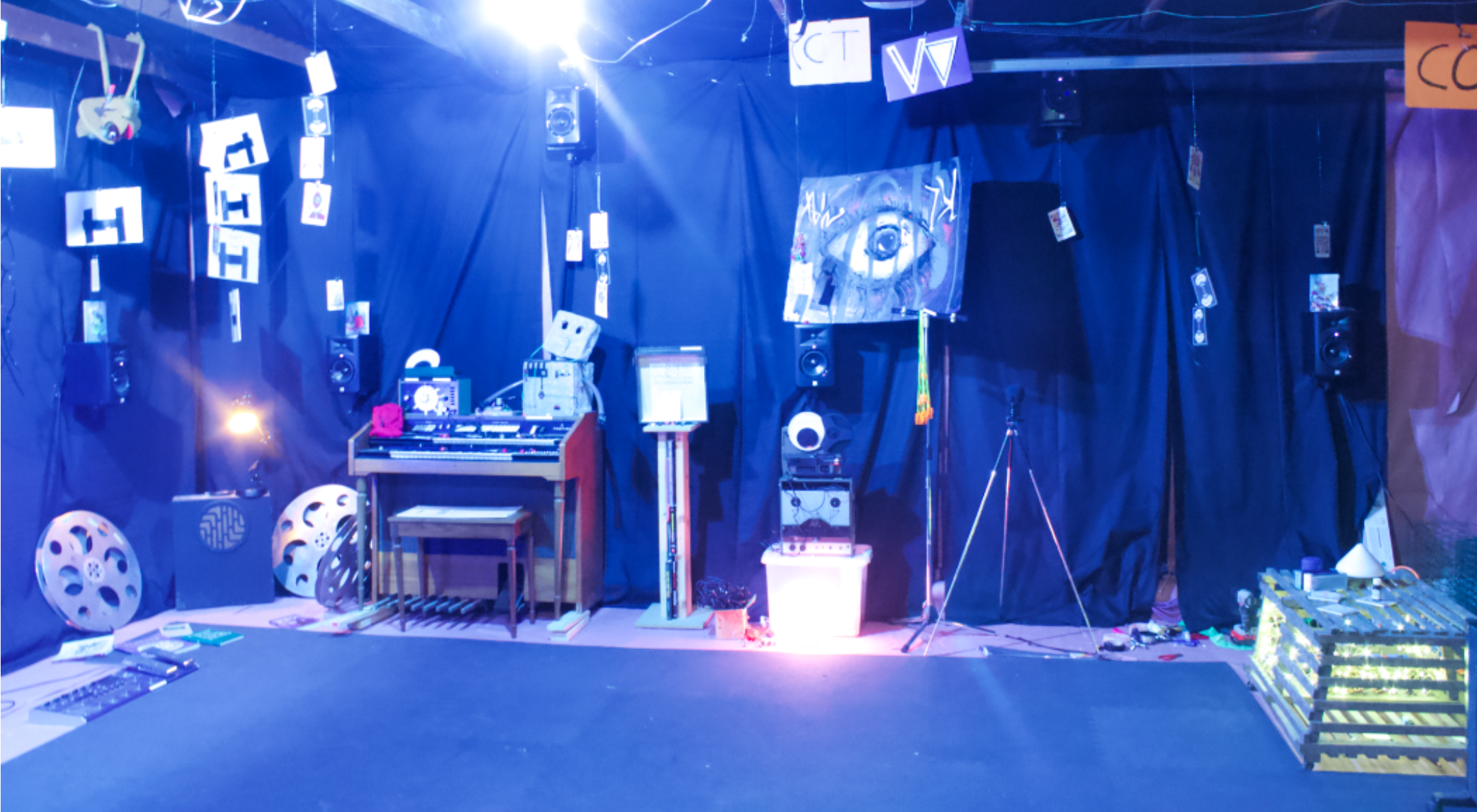 (up above – the ‘Tesseract’ 24 speaker studio built by Ryan and Kat!)

Welcome to the ACOUSCOUS Blog!

My name is Kat McManus, representing Team Boston. Shout out to Bagel and Balloon- our creative partners from Old England, who have been immensely inspiring to us, and integral to this venture. To properly introduce ourselves and the way we internationally formed ACOUSCOUS, it all starts with my very handsome and smaht partner, Ryan Baker.

In 2017, Ryan set out on an adventure to Virginia Tech and brought home some new ideas.  He went to Cube Fest at Virginia Tech following the advice of his former classmate, Tanner Upthegrove. Ryan fell in love with the Cube and immediately started planning to make his own mini-cube in our two bay garage at home in MA.  It was a long process of clearing and cleaning the space, acquiring 24 studio monitors with all the fixins, mounting 20 the walls and 4 to the ceiling. When the mini-cube was up and running Ryan took the next step in the process, which was being part of the spatial music workshop in 2018. 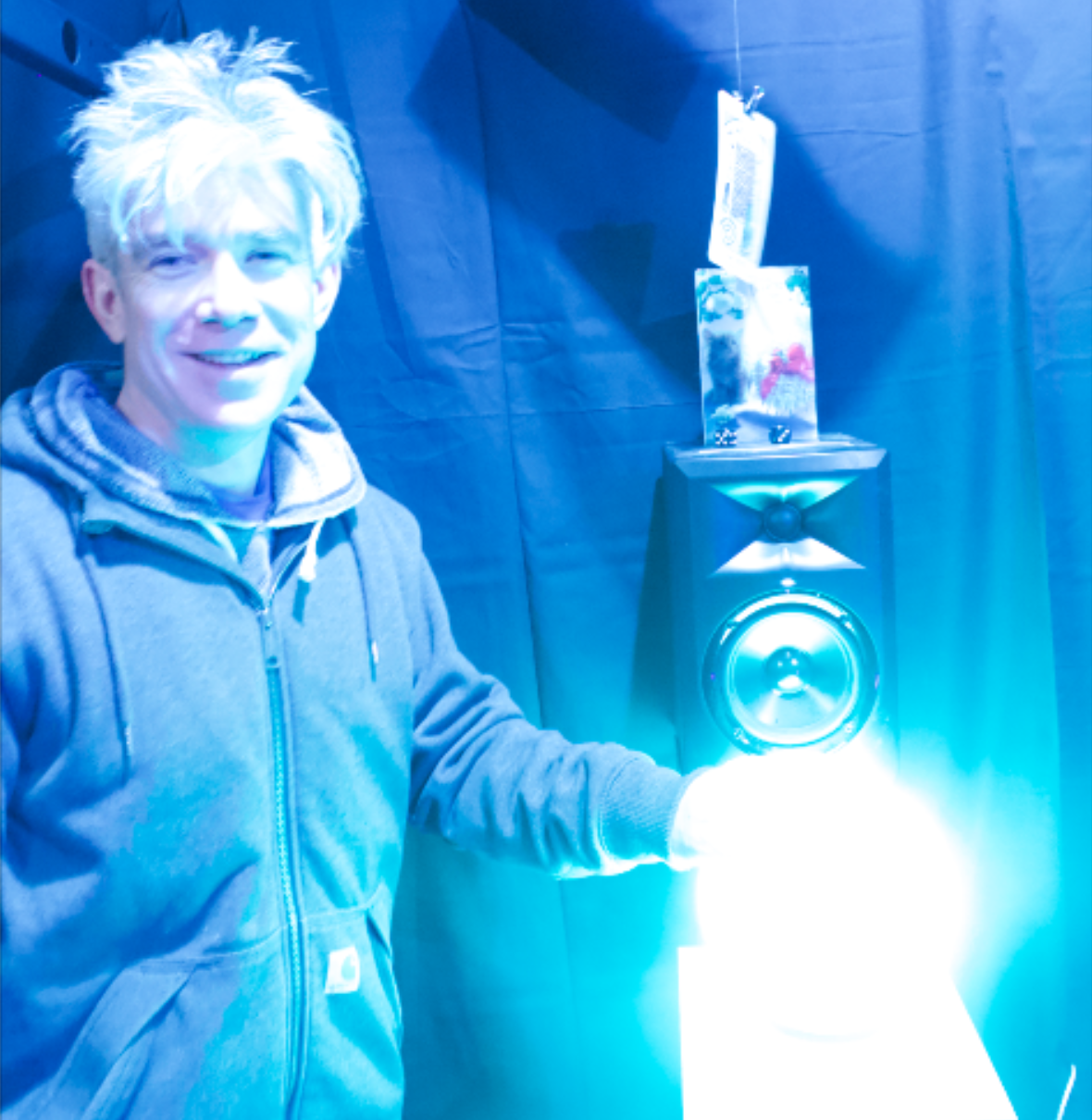 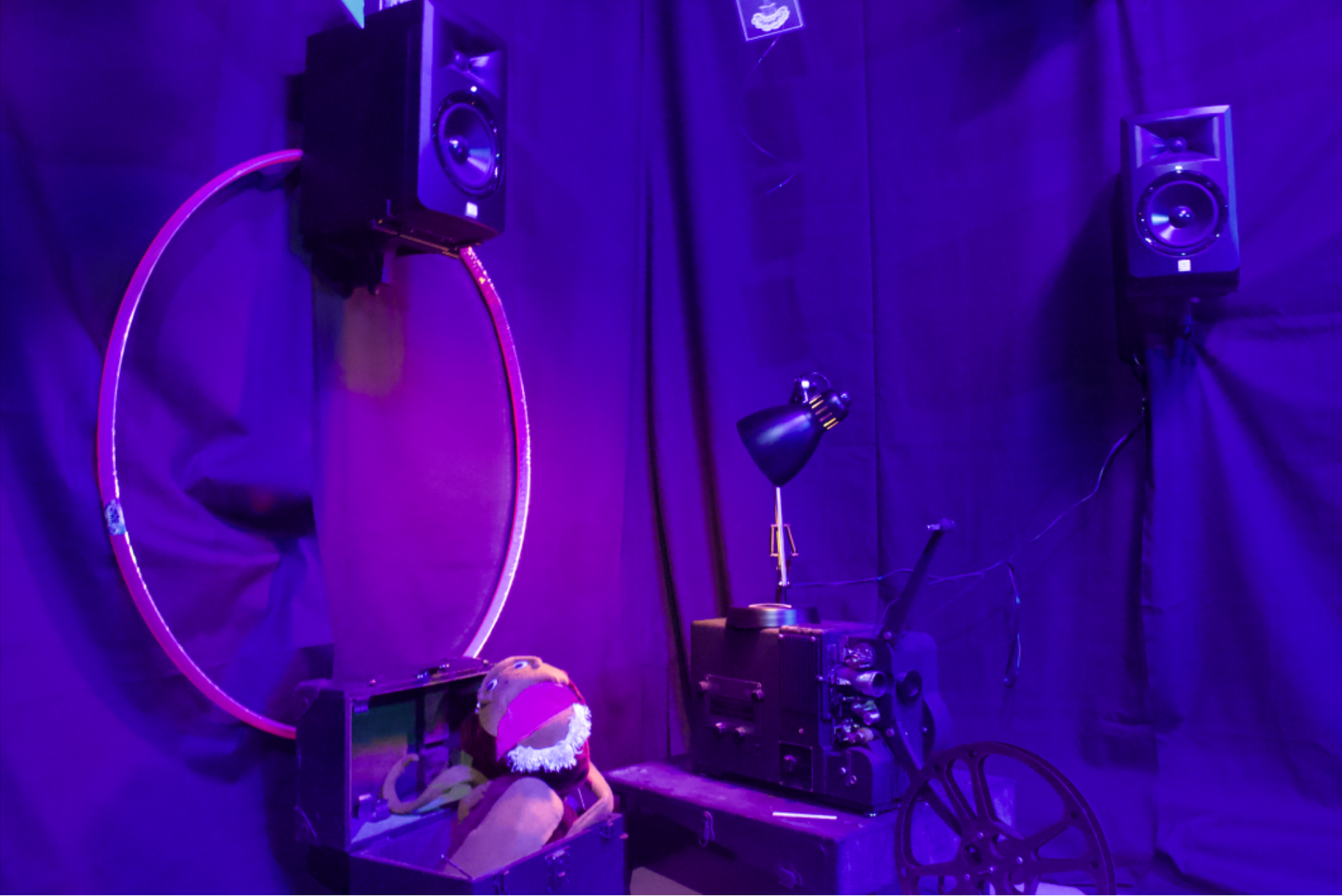 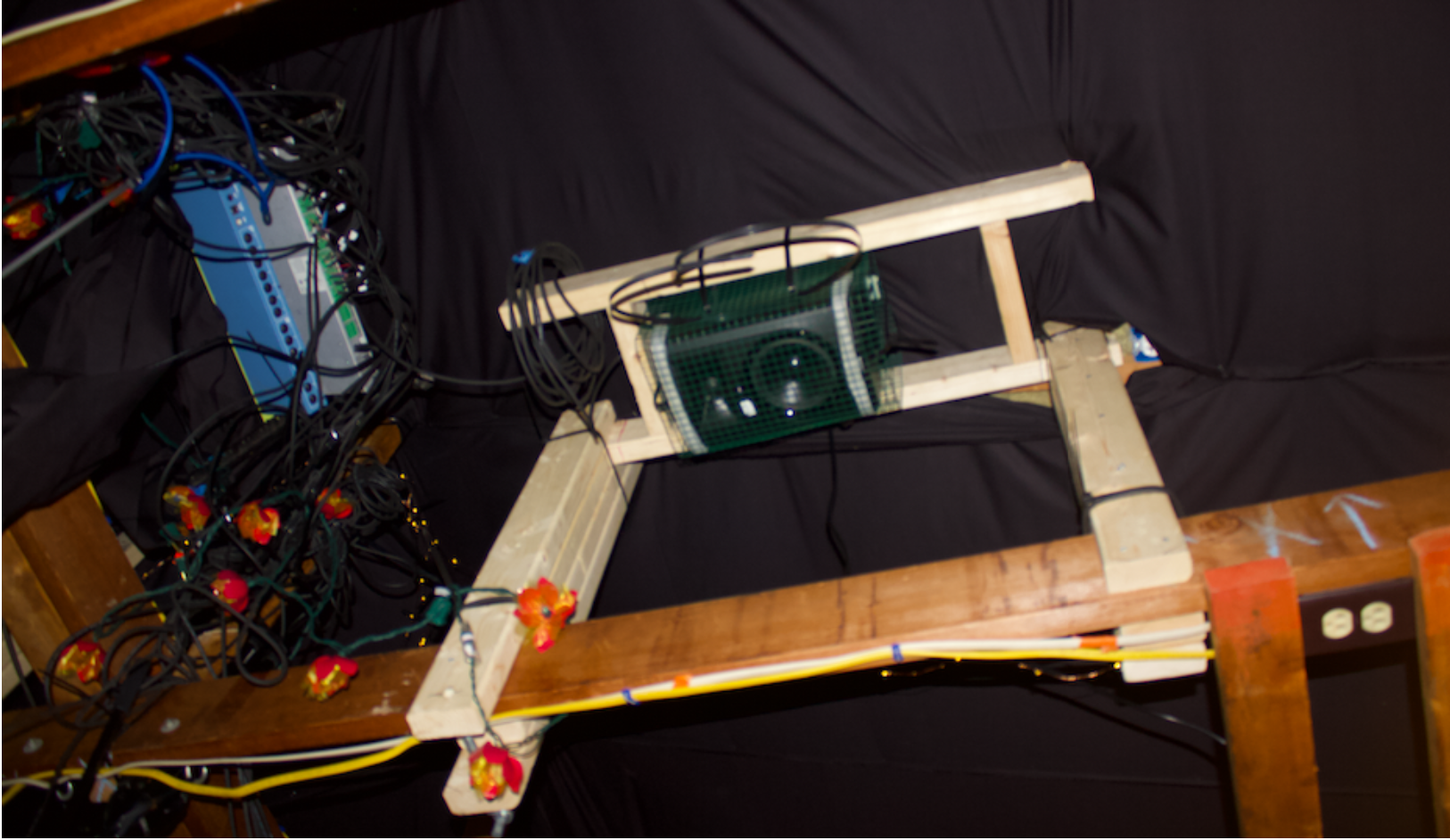 At the spatial music workshop Ryan and I met the other spatially inclined artists and had a wonderful listening and learning experience. Two of the artists we met, Bagel and Balloon, showcased their piece “These Times.” It really struck a chord with Ryan and I because the piece called for such out of the box thinking. It was the only project that involved audience participation and motion tracking magic, which I had no context or experience with before. Overall, it was a simple activity steeped in what was Magic to the audience. For Bagel and Balloon it was complicated technology they had developed over the duration of their residency. Anyway, this idea of ‘Magic’ has lead us to where we are today with ACOUSCOUS. 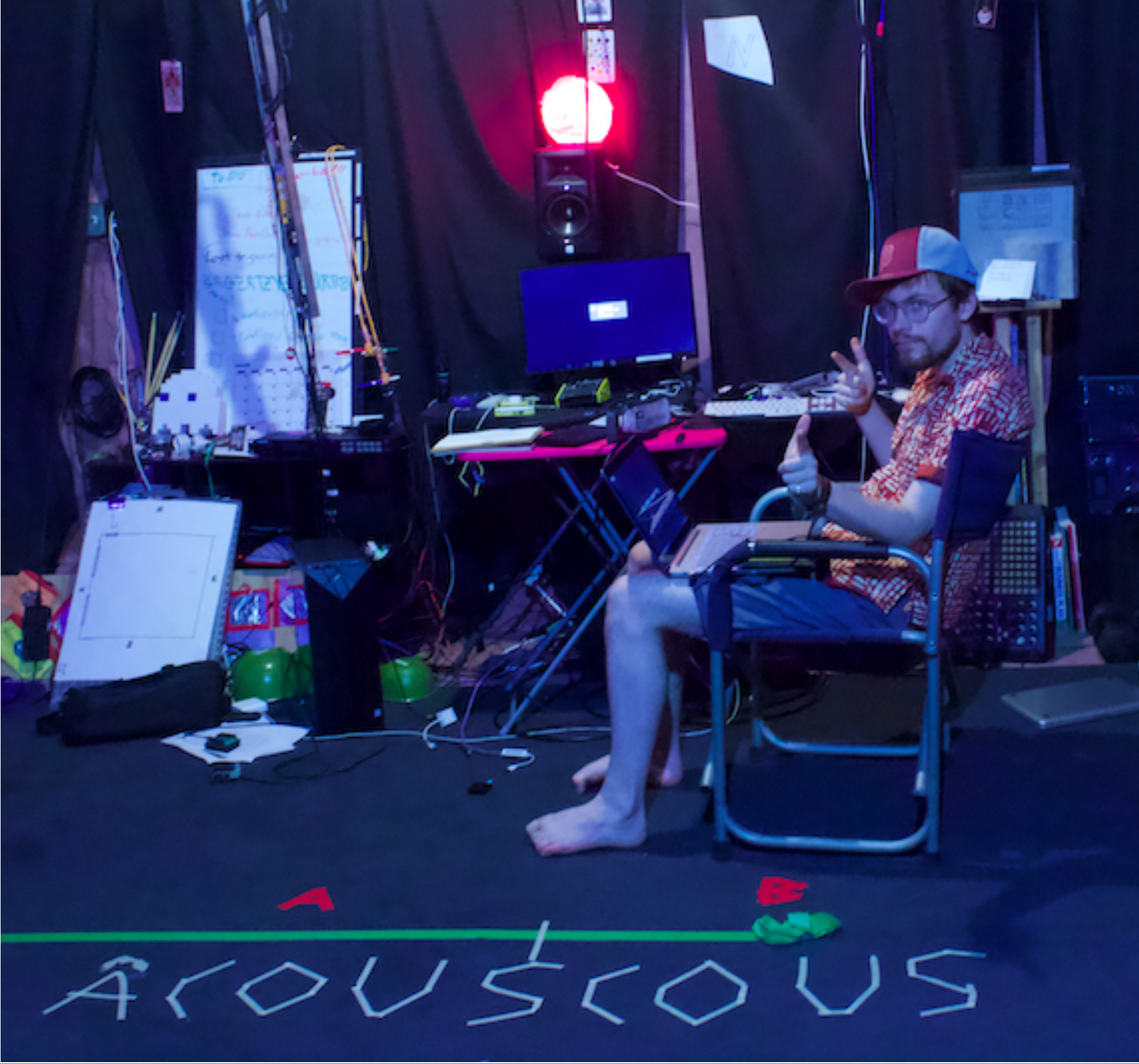 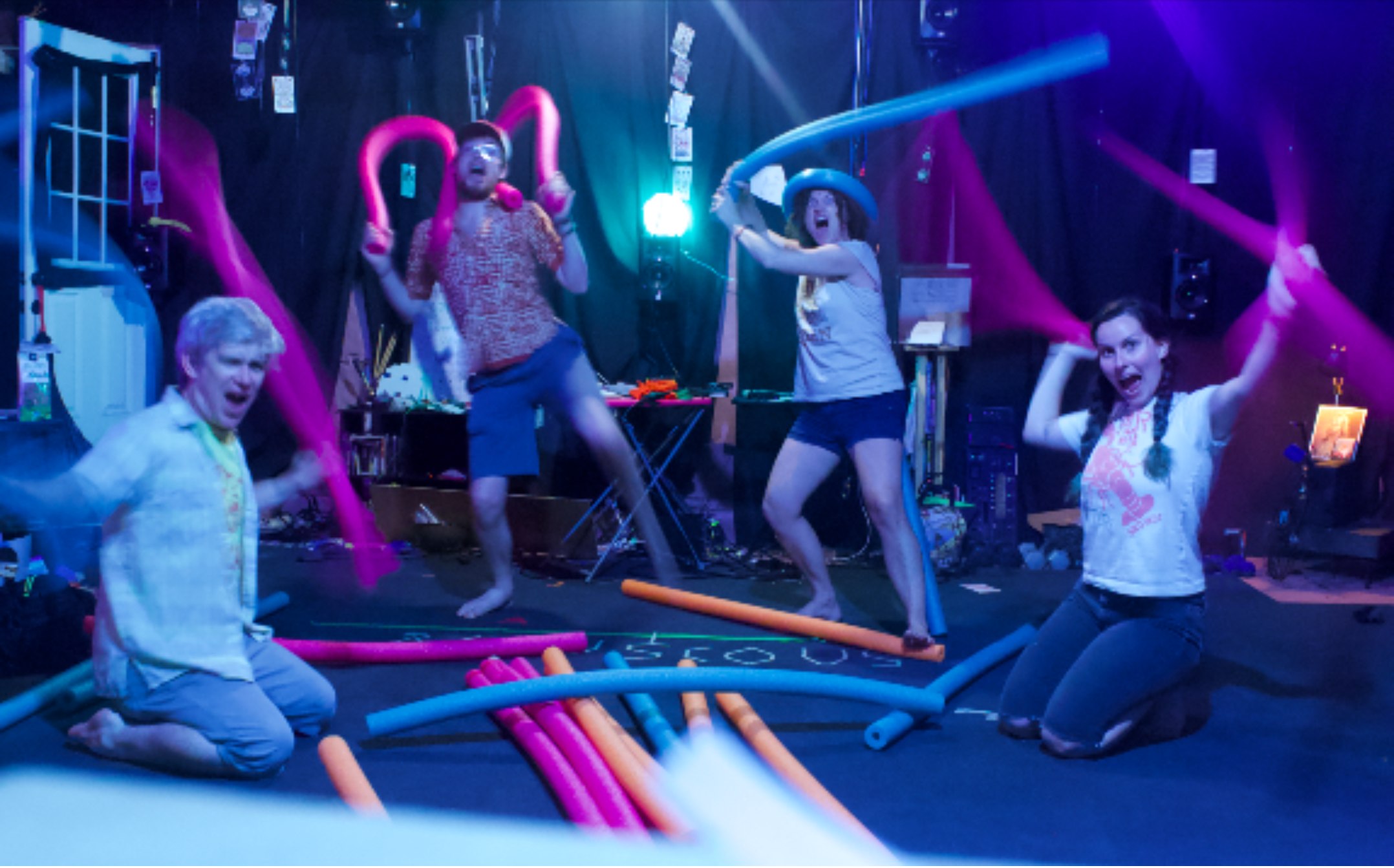 (above Ryan, Bagel, Balloon, Kat – together at last!) 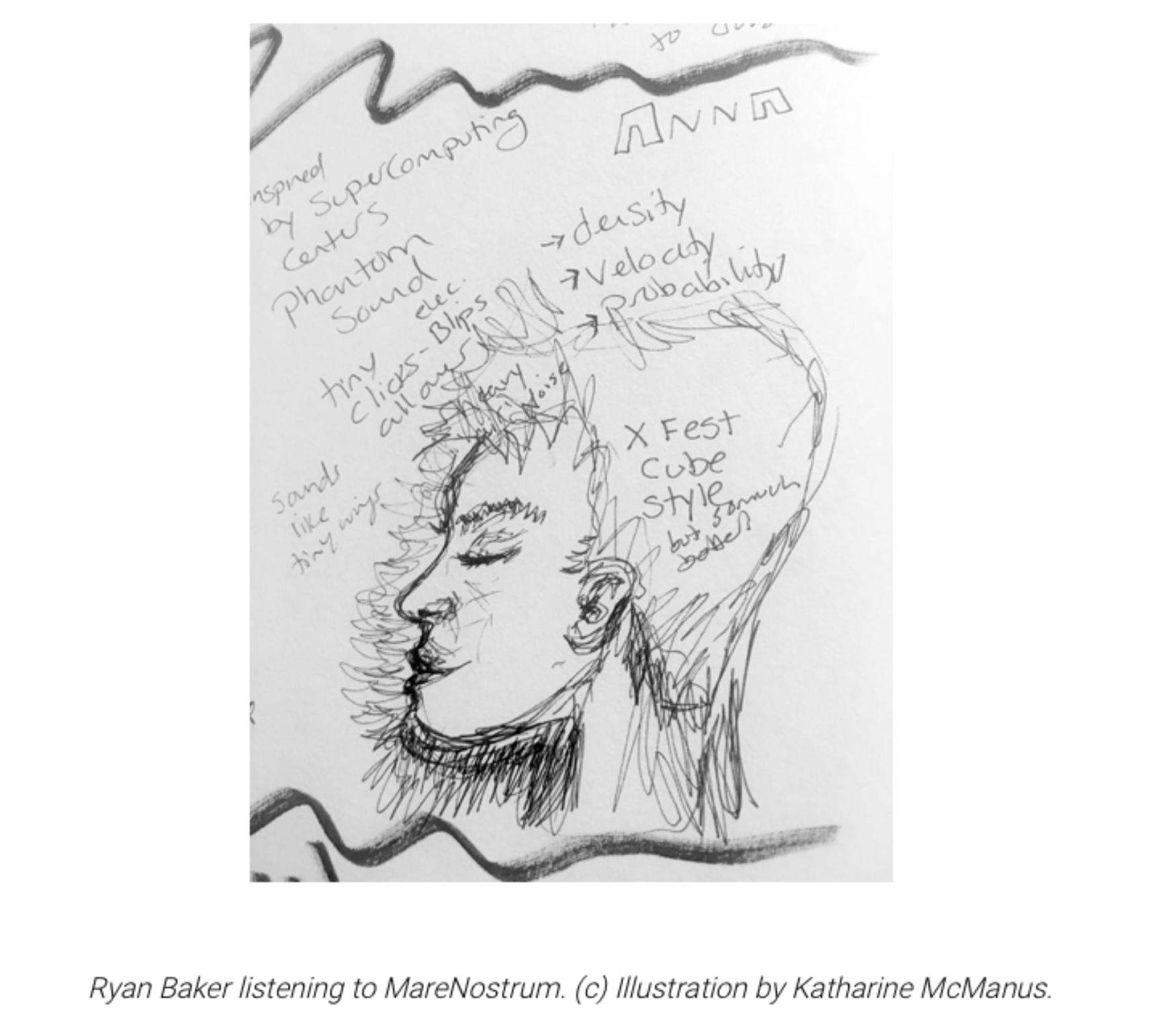 Soon after the 2018 workshop, Bagel, Balloon, Ryan, Tanner and myself began discussing potential collaboration, and began conceptualizing what our Major SEAD ICAT Grant proposition could be. We overcame the challenges of time zone differences and balancing our day jobs while we were in the grant writing process, which was a feat in itself. We were overjoyed to hear that we had indeed won the grant with all our heads together.  Then the real planning and dreaming began. We knew we wanted to incorporate audience participation, motion technology and spacial “soundgardens.” Each of our group members have a specific skillset and expertise that would lead us to actualizing expectations for our group. Ryan composed music and soundscapes, Kat built prototype props and housings for Pozyx tags, Team London was physically testing the Pozyx, Tanner was a tech consultant- each of these jobs was a piece of the pie that needed completion to be ready for the boss of the next level, affectionately known as The Cube.

The Major SEAD Grant called for 2 weeks of residency. We decided as a group that one week of the residency would be spent in Boston at the mini-cube, testing prototypes, and one week would be spent in the cube proper at Virginia Tech. As July crept closer everyone prepared to join forces in person and have their piece of the pie ready to test!

Getting Everyone in the Same Room.

Three months after officially becoming “Acouscoustians,” after all the weekly video meetings, independent technology testing and development on both sides of the Atlantic, Bagel and Balloon landed in Boston on July 13th 2019.  After a day or so to allow B&B some recovery from jet lag we got to work in the mini-cube and started our first full week of the residency. Though our team was still incomplete without Tanner, B&B showed us their successful pozyx tests and Ryan worked some magic to get the special sound up and running in conjunction with incoming pozyx data. By the end of the week we had created our first successful interaction, utilizing what we call “sound zones.” We had two zones mapped out on the floor, with two sounds attached to each zone- specifically a forest of bird sounds and a single morse code beep. We recognized this as success and could only imagine what discoveries lay ahead at the cube proper. On July 18th we rented a soccer mom van, packed it with computers, pool noodles and Bob Ross memorabilia and headed south to Virginia Tech.